Bare Bones Under a Blue Roof

For a billion reasons, I've pared the blog down to the posts that document our strawbale construction, cistern tanks, and strawbale chicken coop.

We're always happy to talk with others about our experience building.  Please feel free to email at any time, and to stop by if you're in the area.

-Shayne
Posted by Shayne at 5:40 PM No comments:
Email ThisBlogThis!Share to TwitterShare to FacebookShare to Pinterest

Exciting stuff happening around here!
As of Saturday morning, we approached going through the second story with the chimney pipe. 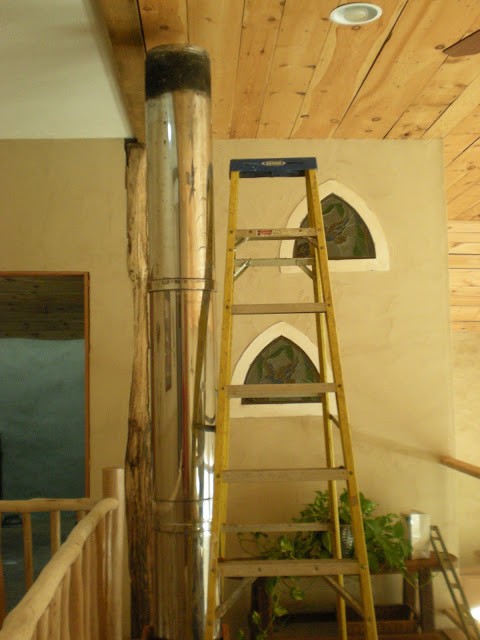 Which meant a hole needed to be cut from the attic above. 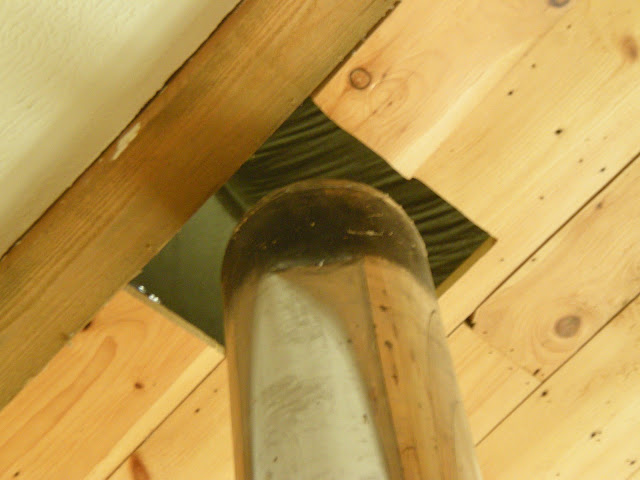 Eventually this stainless pipe needs to be finished off on the outside with brick or stone for aesthetic reasons.  (We chose stone.)  However, you can't mortar stone to a stainless pipe and have it turn out well.  (At least we can't.)  Todd's brainstorm was to put terracotta chimney liners around the pipe, an easier surface to cover with stone.

The only thing was, the pipe was already in place inside one liner, which meant three liners had to be dropped into place from above.  We don't have any pictures of that adventure.  It required three people, two ladders, and a length of climbing webbing.  Todd was in the attic; my father and I were down under the hole.

The webbing was my idea.
It made me nervous to have my husband hand these down through the hole in the second-story ceiling, because each liner weighs about eight million pounds.  (Todd's estimate is 60-70 pounds apiece.)
So I asked him to thread a length of webbing down around the bottom of each liner so he could lower each one down.  That would slow its progress as it descended towards my head.
He acquiesced, and I felt a bit safer while we worked.
My dad was the one to bear most of the weight as each liner came down.
I was there to handle a tiny bit of weight and say very helpful things.
Half an hour and three tiles later, we were done. 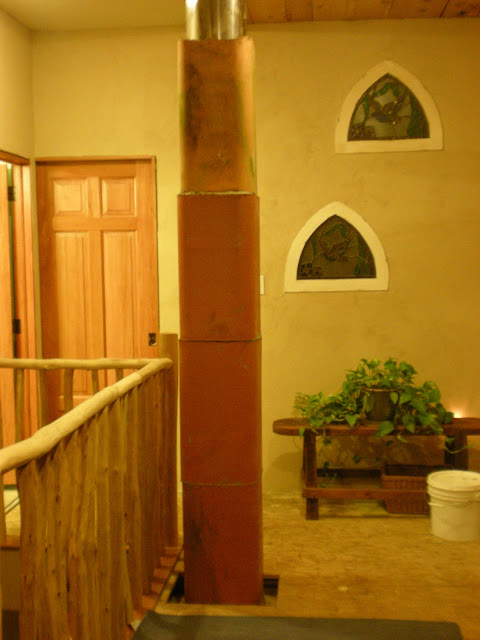 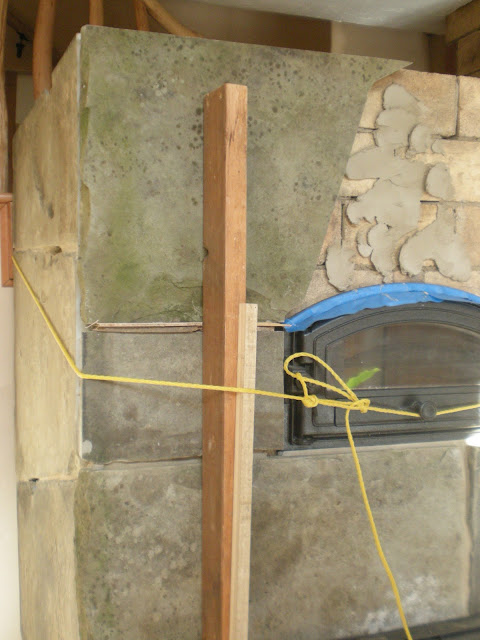 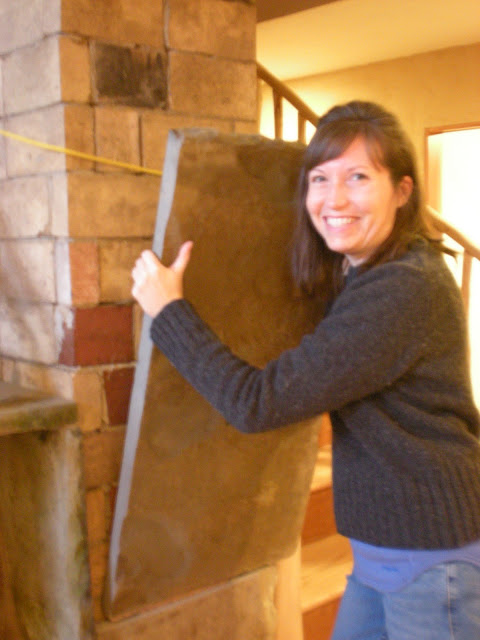 The Next Right Thing

He comes home from work.  In the few minutes we have before dinner is on the table, he's out there with the stone and the saw, making just. one. more. cut. 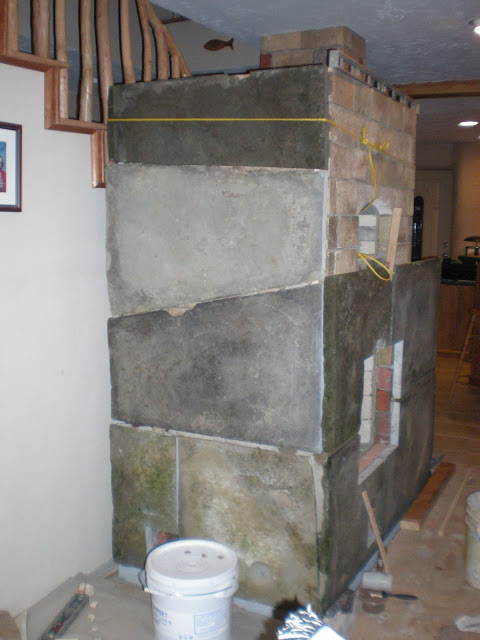 His determination is what has seen us through on so many projects.
He simply never gives up. 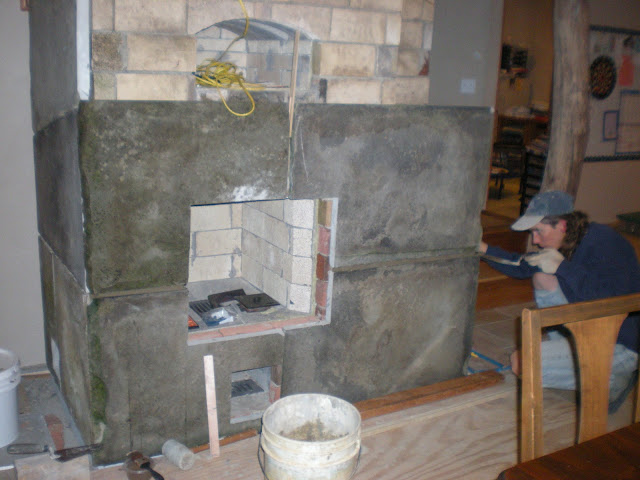 Tonight, that means the top stone on the left side and the piece at the top left of the oven door.

In a much bigger sense, it's what holds us together.
Steady, unchanging, dependable.
Doing the next right thing.  Every time.

#5...two part-time jobs that I love, neither of which require me to work on Monday
#6...the pleasure of getting to know a new friend
#7...wild turkey grazing through the woods
#8...a child eager to study and work on projects
#9...Micah's still-small boy frame leaning on mine to watch Veggie Tales
Posted by Shayne at 6:42 PM 1 comment:
Email ThisBlogThis!Share to TwitterShare to FacebookShare to Pinterest
Labels: daily life, masonry heater

And yet more stone!

Two more pictures, to show what Todd accomplished in the afternoon: 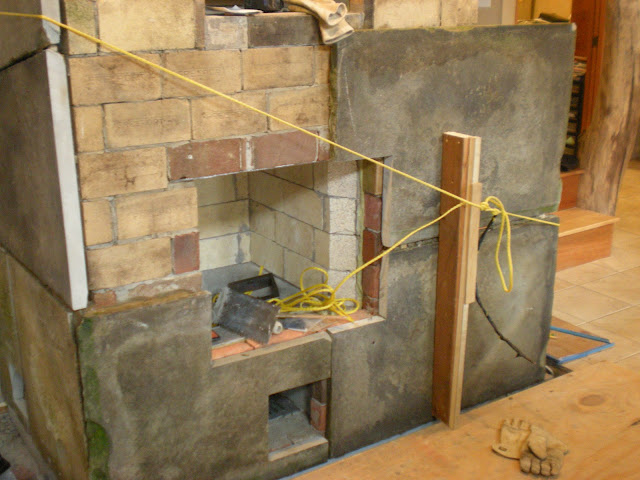 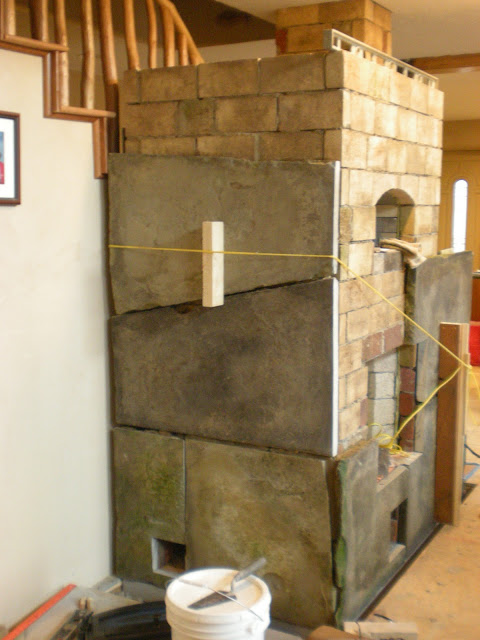 Posted by Shayne at 7:11 PM No comments:
Email ThisBlogThis!Share to TwitterShare to FacebookShare to Pinterest
Labels: Finnish fireplace, masonry heater

We have Todd's brother, Tim, to thank for the outer stone for our fireplace.
A few years back, Tim replaced a stone walkway with poured concrete.  He and Todd loaded up the giant pathway stones with the intent of using them as the outer stone layer on our masonry heater.  (It was another one of those times when I was glad I was the girl, and no one would expect me to try and lift any of those monstrous pieces.) 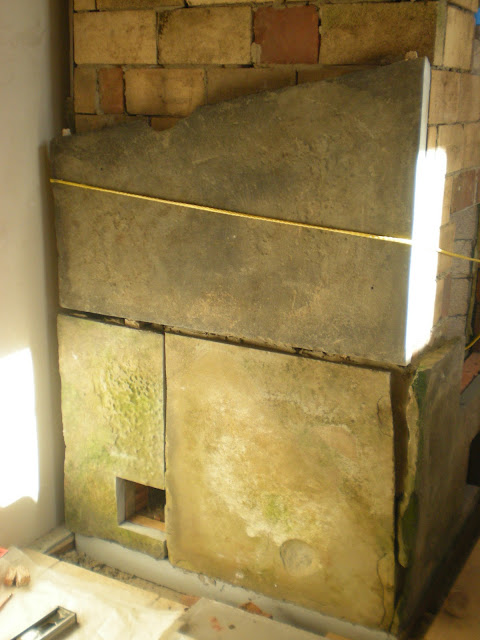 The yellow rope is just a temporary safeguard, should the mortar decide to let go while drying.  (I'm not actually sure it would have any chance of holding the stone in place should it decide to let go, but it makes us feel better.) 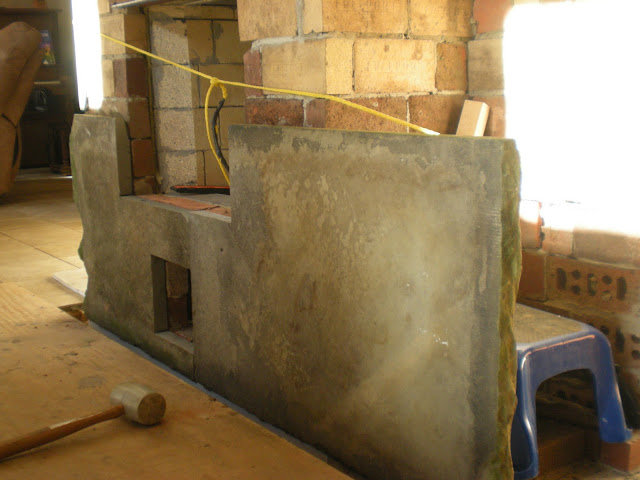 We've been surprised how relatively easy these stones are to cut.
I've said it before, but it bears repeating:  it amazes me that Todd is able to visually plan all of this and have it turn out just the way it needs to.  It's a good thing that it's not my job. 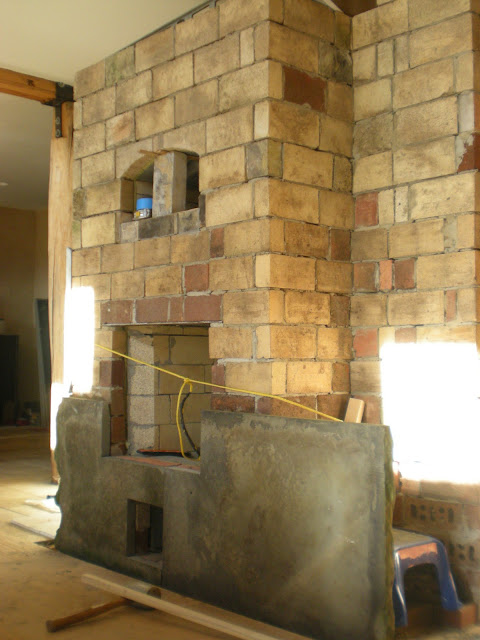 We're getting closer and closer to that first fire.  It's time to start learning how to use the stone oven.  I can smell the pizza baking already!
Posted by Shayne at 9:21 AM 3 comments:
Email ThisBlogThis!Share to TwitterShare to FacebookShare to Pinterest
Labels: masonry heater
Older Posts Home
Subscribe to: Posts (Atom) 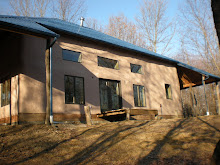 Books On My Shelf